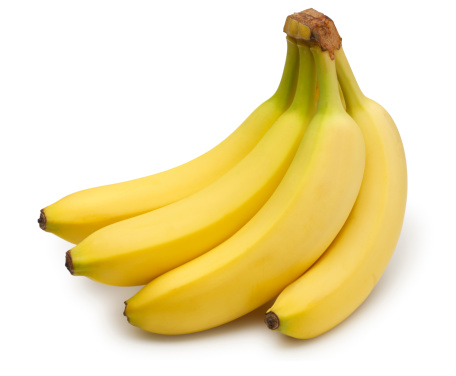 Eating banana is useful in the following diseases:
1. High blood pressure ; Electrolyte is found naturally in banana which keeps the blood pressure normal. Huge quantity of potassium and less salts in banana helps to keep smooth blood flow .
2. It is generally believed that banana increase blood sugar and not good for diabetics. Being included in climax index, banana helps to control blood sugar.
3. Due to having less fats, banana reduce cholesterol. Vitamin B found in banana reduce body weight.
4 .New research say that eating two bananas after heavy labour is enough to gain lost strength.
5. Recently conducted surveys show that eating banana has good effects on depression. Banana has a special type of protein which relaxes human body .
6. A large quantity of vitamin B6 in banana give you a good sleep.
7. Large quantity of iron in banana produce more blood.
8. Eating banana keeps you active. It gives relief in constipation, stomach inflammation, intoxication, depression, nervous breakdown and ulcer.
9. Banana has some qualities to prevent from cancer.

Scientists have discovered that banana has ability to protect from AIDS virus. Laboratories tests show that an element called BanLec , is found in banana. This element has the same effects as those
medicines used to kill HIV virus. Many plants have different chemical elements called Lectin, resist the infections and BanLec is one of them. Scientists discovered the Lectin found in banana blocks the HIV virus to enter into human body. BanLec attacks on a wrapped up protein where genic material of HIV is stored. Mr. Micheal Swanson, Chief of research team, Michigan University says that HIV virus change his nature to resist the medicines. But in the presence of Lectin, it will be hard for HIV virus to change his
nature. BanLec was tested in laboratories and was found that it is has the same effect as anti HIV medicines T-20 and Seraveroc have.

Swedish nutritionists claim that green leaves vegetables reduce the risk of Liver and heart disease. A large quantity of Nitrate found in such vegetables help to make heart strong and brings a fatty Liver to normal size. Palak (a sort of spinach), Salad and Cauliflower are main source of Nitrate. These have many medical benefits for Non Alcoholic Fatty Liver Diseases (N.A.F.L.D.). Fat accumulate in Liver, and if not cured, leads to death. This disease has a connection with obesity and unusual metabole condition. In the chronic stage of  NAFLD, killing Fibrosis and Cirrhosis take a leading role to carry to death. The only treatment NAFLD is exercise and care. The researchers of Karolinska Institute (Sweden) have gone through experiments on green leaves vegetables and found that Nitrate  found in green leaves vegetables reduces the creation of fat in Liver. Nitrate in such vegetables has other better effects :

1.  It keep high blood pressure in control
2. It reduces the insulin sensitivity