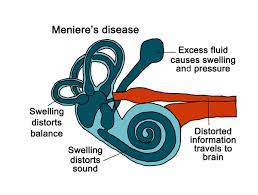 AOA. My son Anwar Ahmad, age 48 years , medium built body has a very strange illness. First of all, he feels vertigo. His body starts trembling. He complaints that his vision has become blurred. Some time he start vomiting, a sever vomiting which lasts for hours. Many time he fell down as if he has no control on his body. His uncle have a believe that my son  is under control of Genii. He called a person who claims to be expert of removing Genii. That person carried his treatment but  no relief. One of my friend told me that Homeopathic system of medicine can show some miracles in some illness. I would be very thankful if you prescribe a suitable medicine to cure the illness of my son.

First of all, i would like to clear about Genii. Genii definitely exist but as for as your son’s illness is concerned, it is a very rare disease called ” Meniere’s Disease” and have no concern with Genii. This disease was first  identified by a French Dr. Prosper Meniere (1799 – 1862 ). He claimed  that inner ear could be the source of condition combining vertigo, hearing loss and Tinnitus, which is now known as “Meniere’s Disease. In this article we will discuss in details about it.

What is Meniere’s Disease?

Meniere’s Disease is a very rare inner ear  condition that can cause vertigo, a strange type of dizziness, in which the patient feels as if he/she is spinning. The patient hear ringing or different sounds  in the  ear ( Tinnitus). Loss of hearing which comes and goes, a feeling of pressure in the ear, at worst, loss of body balance. Usually one ear is affected . Hearing loss can be permanent.

A French Doctor Prosper Meniere suggested in 1860 that symptoms come from the inner ear and not from the brain, as most people believed. The cause of Meniere’s Disease in not known. As the time passed, Doctors believe that they know how the symptoms of the disease happen. They describe it as follow:

“Fluid builds up inside a part of our inner ear called ” the Labyrinth” , which has a structure that helps with hearing and balance. The extra fluid interferes with the signals our brain receives, causing vertigo and hearing problems”

How people get Meniere’s is not clear. Researchers have several and different theories about what might affect the fluid in the inner ear.
Causes could be :

It is quite possible that a combination of issues come together to cause Meniere’s.

Symptoms of Meniere’s Disease differ from person to person. Symptoms can appear suddenly. No fixed interval known, and how long will remain, not known. Sudden symptoms are considered as attack, which vary in length , usually  last between 20 minutes to 24 hours. The following symptoms can occur during attack:

It is very difficult to predict  when a vertigo attack will occur. It is recommended to keep vertigo medication in hand all the times.

A person with Meniere’s Disease may experienced rise and fall of hearing level. The patient will be more sensitive to loud sounds. At the time pass, the patient will have long term hear loss.

Above psychological symptoms could develop to the patient of Meniere’s Disease. These symptoms can occur any time, without any alarm and can affect the ability to work. When a person lost hearing completely, he/she will find difficulty for social interaction, with family and friends.

Meniere’s disease has the following stages:

The Aura stage——- may include following symptoms:

The Early stage ——– These symptoms may appear:

The Attack stage :   ——–A notorious stage for these symptoms:

The last stage of Meniere’s disease:
Patients may feel the following:
1 – Issues with vision and balance.       2 – Tinnitus   3 – Hearing loss.

The extra fluid in the inner of ear interferes the signals our brain receive, causing vertigo and hearing problems.

Can you live a normal life with Meniere’s Disease?.

How long the disease lost?

Since there is no cure for Meniere’s disease, it is a chronic disease and may persist for 30 years or more. Hearing loss goes through out the life. A hearing aid might be a solution (  consultation with a doctor is a must).

How do you stop Meniere’s attack?

It is almost impossible to stop Meniere’s attack. Some precautionary steps can help to  prolong the attack. These steps are:

What triggers the disease attack?

Some Meniere’s patients experienced or find certain events and situations that can be the  cause of attack. These situations include”

When a Meniere’s disease patient hears or experience ringing or other noises in one or both ears , this is called Tinnitus. In Tinnitus, only the patient hears   the sounds and other people do not hear. It is common in older adults. It is usually caused by age related hearing loss, an ear injury or a problem with the circulatory system.

In Homeopathy system of medicine , there is a medicine to reduce or eliminate the  Tinnitus. Medicine name is ;
Carboneum Sulphuratum 200 —-  Pour 5 drops of medicine in           1/2 glass of clean water and drink it when you hear sounds.

About one  year before, when i laid down to sleep, i hear a strange sound in my ears, Sound was like the sound of a small engine running and making a sound like ‘took took” continuously. The sounds  volume increased day by day. I faced difficulty to sleep. I took 10 drops of a Homeo medicine named “Verbascum” mother tincture in 1/2 glass of water and drank it 2 times a day for 10 days. And sound of “took took” was gone.

Some herbal such as Ginger root and Ginkgo Balboa may provide some relief from vertigo  in some people. However, according to  the NIDCD, no evidence support using herbal supplements and acupuncture to treat Meniere’s disease.

What can you NOT do with Meniere’s Disease ?

I do hope you will be now well aware of your son’s illness. I pray to All-Mighty Allah to bless your son with a smooth life.