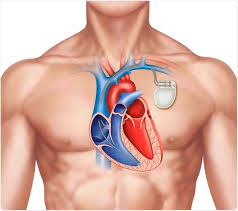 Human heart is  a main part of our body. Our heart pumps blood around the body  and beats  around 100,000 times a day during pumping the  blood. Beating heart continue 24 hours without any break. If heart beats are stopped for any reason, we are dead. Human heart health is very important . A new device Battery-free- Pacemaker has been developed to regulate abnormal heart beat. To know better about blood pressure , please read “ Homeopathic Clinic-Blood Pressure, A to Z, part-1 ” .

As we know, our heart beats continuously without any break. As we grow older, our hear become weak. There are some other causes which affect the heart beats to make it abnormal. Heart beats on  a regular rhythm which changes in response to the body activity. Abnormal  heart beat is known as Arrhythmia. An estimated 5 % of the population worldwide has arrhythmia.

Thanks to the new research from a collaboration between the University of Arizona and  Northwestern University has developed a wireless, battery-free pacemaker. This device can predict cardiac events and provide more subtle stimuli to specific cells. The battery – free pacemaker use light to to target just the muscle cells of the heart which , researchers believe may reduce pain. The new battery-free pacemaker can be modified to fit the individual heart making sure how it deforms when beating.

The new battery-free  pacemakers are digitally manufactured . The device has four thin film leaves which wrap around the heart. They are ultra thin and are enable soft mechanics to reduce impact on  the hart. Dr. Philip Gutruf, the study co-author and assistant professor and Craig M. Berge , the faculty fellow at the University of Arizona explained ” The unique design of the battery – free pacemaker provide multisite excite of heart muscle cells, and its use of optogenetics provides targeted electrical stimulation to the heart muscle cells “.

Optogenetics is a technique based on the introduction of genes for light-sensitive proteins to specific cells. The modified cells express light -sensitive ion channels which allow them to be controlled by light. This is explained by the study author Dr, Igor Efimov , chairman of George Washington’s Department of Biomedical Engineering as under :

” Optogenetics is a technique, which is based on the interaction of light with a light-sensitive  channel called Opsin. By design , Opsins are expressed using transgenic technology in specific cells , in myocytes – cardiac muscle cells “.

” It is important to note that pacing does not activate pain receptors in the heart. The patients with the pacemakers typically do not feel any symptoms at all . Dr Doshi  also said  that biggest impact the study has , is potentially allowing defibrillation (Defibrillation is the use of an electrical current to help your heart return to a normal rhythm when a potentially fatal arrhythmia (abnormal heart rhythm) is happening in your heart’s lower chambers (ventricles) or shocking of the heart for those patients who have weak hearts , to be done in a less painful manner” He also said ” When patients have defibrillation of the heart muscle, they often do feel discomfort  because  the electrical current also effects other muscles in the body”.